The crude oil prices, freight rates, and transit times have downturned significantly over the recent months, but commodity prices are still riding high due to elevated energy prices. Also, adverse weather conditions in parts of the world and increased labor costs, within transport and logistics, add to pain. markets are still characterized by inflation and volatility. The crude oil prices, freight rates and congestion rates have downturned over the recent months, but still remain on a considerably higher level than before Covid and the Russia-Ukraine war. Also, extreme drought in different parts of the world, adds to the pain, especially in the grain and electricity markets. These disruptions cause ripple effects on the commodities, but still our delivery capacity remains very strong.

This market and business update intends to give you an indication of the expected price development of the most important commodities, freight rates, supply chain challenges, the additional effects of labor shortages, and challenges in major ports.

TPEB and FEWB transit times fell even further in October, compared to September 2022. According to the Flexport Ocean Timeliness Indicator, the continuous downturn is clear, though transit times still remain above pre-pandemic levels. TPEB fell to 82 days, and FEWB dropped to 89 days. The continuous downturn comes before the peak season, and we might see new bottlenecks and increasing wait times in the coming months. 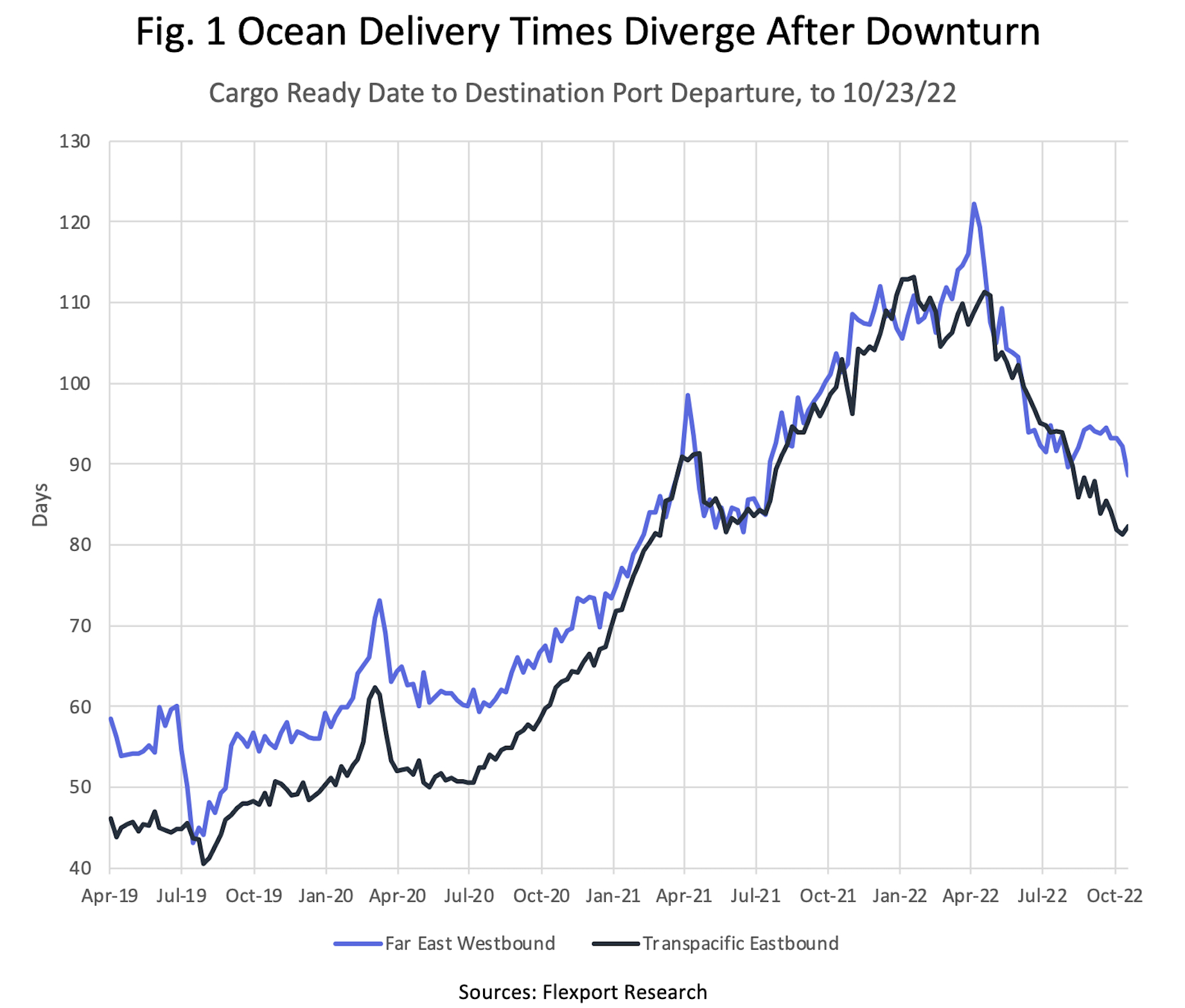 According to the Drewry World Container Index, a 40-feet container has dropped 70% since its peak in September 2021, indicating a return to more normal price levels. However, the container index still remains 121% higher than average pre-pandemic rates in 2019. Looking into 2023, freight rates are estimated to further drop due to a decline in consumer demand and a wave of new vessels hitting the water (Source: Freightwaves). The arrows are already pointing down. Capacity is being removed by slow steaming, and in September, we saw low imports to Long Beach and Los Angeles despite the fact that September is traditionally a high-volume month for end-of-year products (Source: Freightwaves). 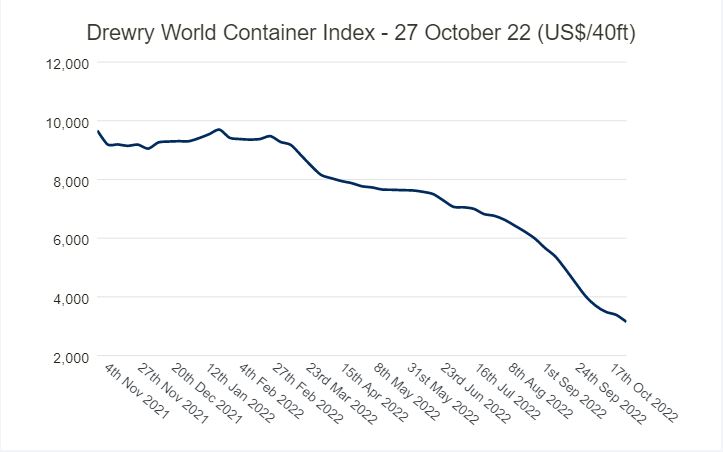 Oil prices dropped for the fourth month in a row, but estimated to increase next 12 months

Driven by expectations of an economic slowdown, the crude oil prices saw the fourth consecutive monthly decline, reaching its lowest pre-pandemic level in September at around USD 76 per barrel. Still, oil prices increased to around USD 88 in October after OPEC-countries agreed to cut production in November. In 12 months’ time, oil prices are estimated to be traded at around USD 99.87 due to these tighter global supplies. 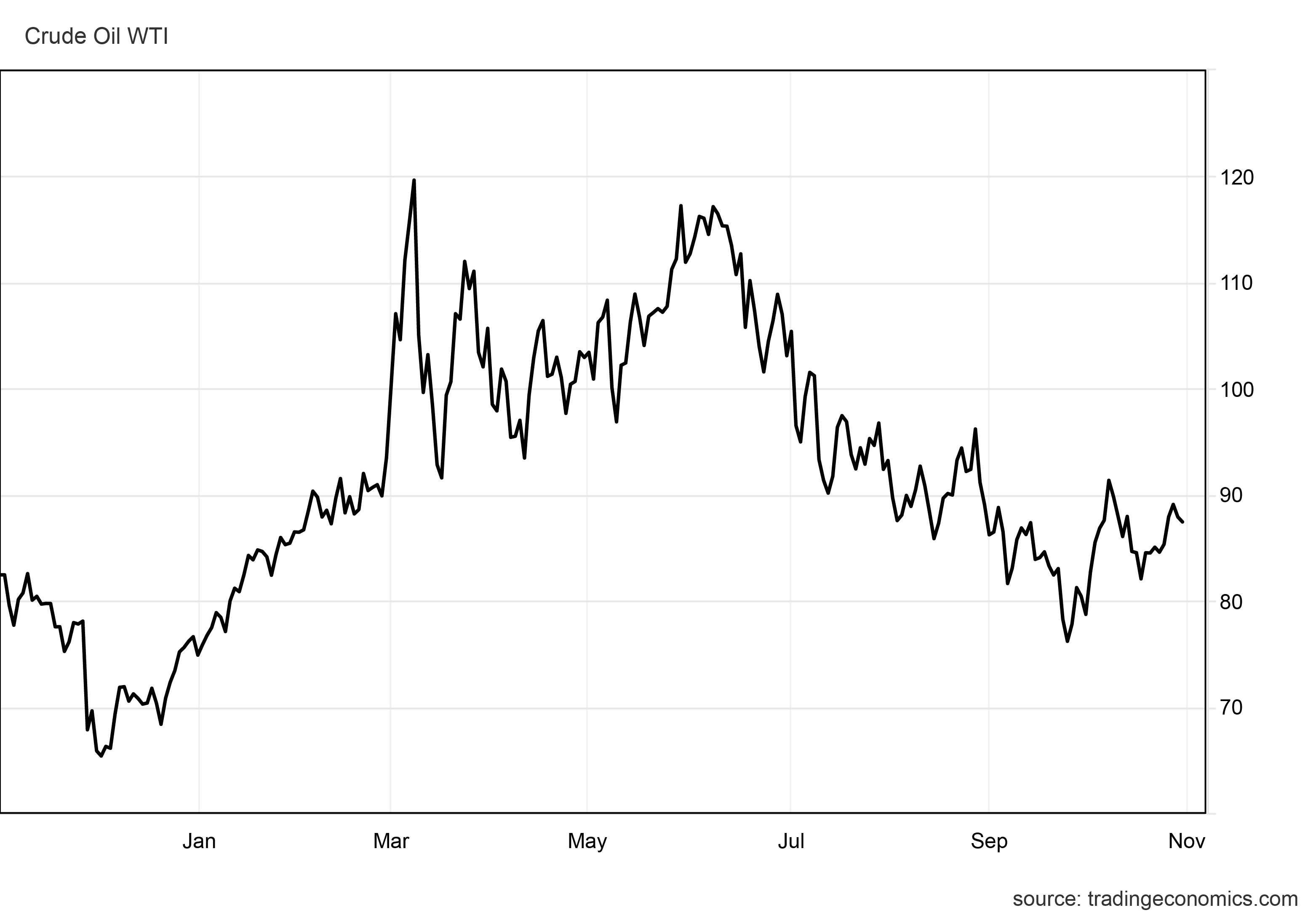 Inflationary impact on commodities, up 19% since beginning of 2022

According to the CRB Index, the commodity prices increased by 46.57 points or 19% since the beginning of 2022, elevating also the price level of certain provisions and stores. However, due to the intermediate downturn of the commodity index from July to October this year, some provisions and stores have stabilized or decreased slightly. In 12 months time, commodities are estimated to increase by around 7% as energy prices are expected to remain well above pre-pandemic level. As recently as 29 October, Russia suspended the United Nations-brokered deal to secure the export of Ukrainian grain out through the Black Sea. The suspension is expected to impact global food prices directly, especially for wheat. 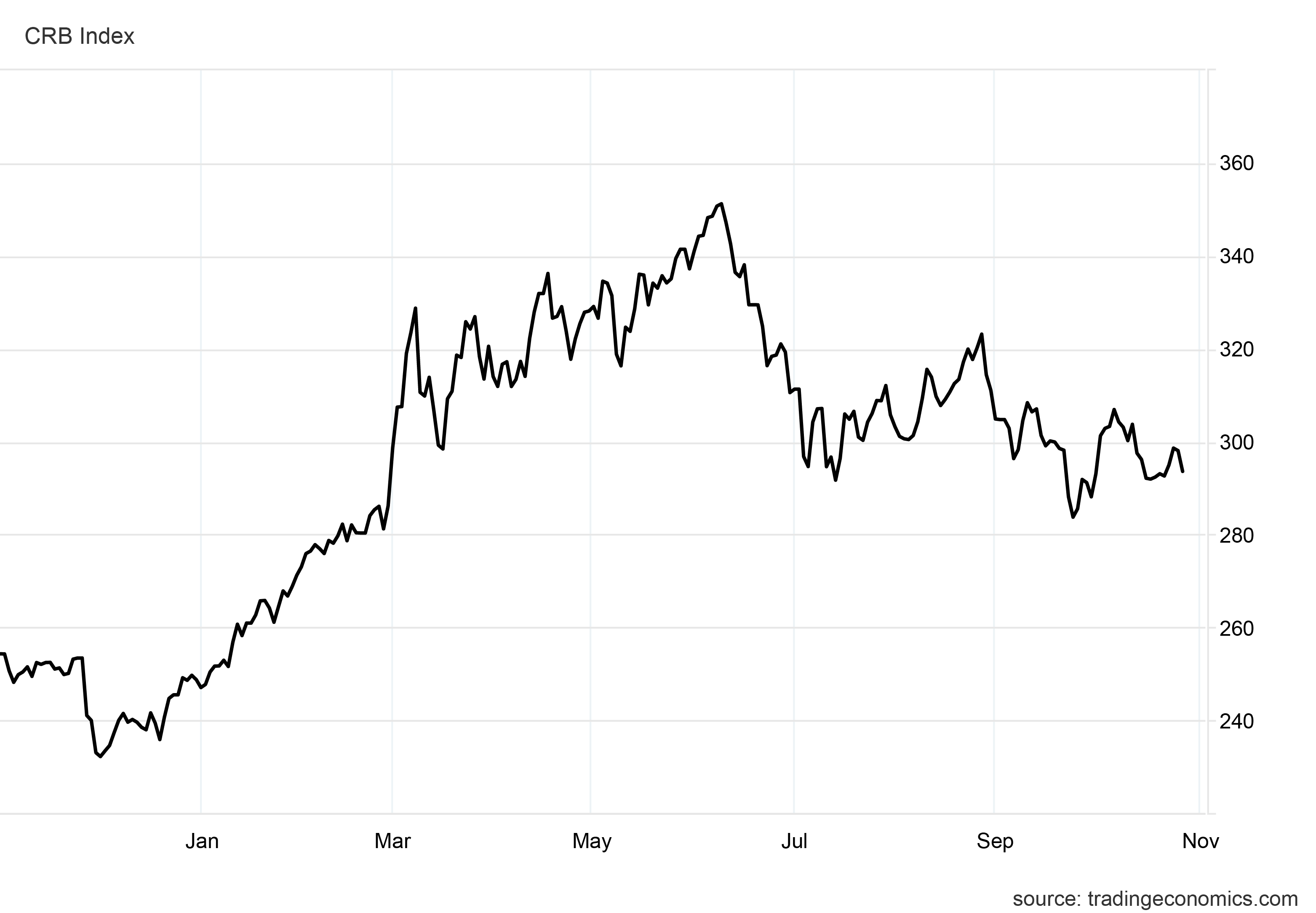 The industry is finally getting some relief with direct supply chain costs. Freight rates, oil prices and transit times have dropped during the recent months, though still at a significantly higher level than before Covid 19. But several other factors including sky-high energy prices, adverse weather patterns and labor costs have maintained the high commodity price level.

Energy prices
Energy prices including oil, natural gas and coal prices reached an all-time high earlier this year, impacting production costs including heating, electricity and manufacturing. Further, the global spare production capacity buffers in 2022 have declined. Even though energy prices have declined from record highs earlier in 2022 and are expected to decline further over the next two years, they will still remain well above their recent five-years average (Source: The Worldbank Commodity Markets Outlook, October 2022).

Adverse weather patterns
Adverse weather patterns have also impacted the world food price level. At a global level, maize production is expected to decline 4% this season, in response to weather-related lower yields in the United States and the EU. Global rice production is expected to decline by 5% reflecting, among others, lower crops in China due to dry conditions (Source: The Worldbank Commodity Markets Outlook, October 2022) and flooding bringing destruction to rice crops in Pakistan (Source: Gro Intelligence).

Labor costs
The shortage of labor capacity and the need for additional capacity to meet the increasing demand during and after Covid, has impacted the salary level of transport and logistics significantly. According to FreightWaves, some American transport companies have raised driver pays by 10-12% since the pandemic started. In The Netherlands, they are negotiating collective labor agreements for transport and logistics with trade unions of around 7.5% for 2023. The lack of labor capacity across many sectors, including transports and logistics, is part of the catalyst driving inflation, and part of the reason why commodity prices remain high.

Inflationary impact on provisions on short and medium term

On short term, we do not foresee any major shortages on provisions as our existing contracts are still honored by our suppliers, giving high priority to large customers. However, this situation might change any time due to volatility, forcing us to substitute certain products with comparable products.

According to the FAO Food Price Index, food prices averaged 136.3 points in September 2022, down 1.5 points or 1.1% from August 2022, marking the sixth consecutive monthly decline. Still, food prices remained 7.2 points or 5.5% above its value compared to August 2021. Due to the inflationary effects, we expect certain price increases within the provision categories on short term. The list is not exhaustive. 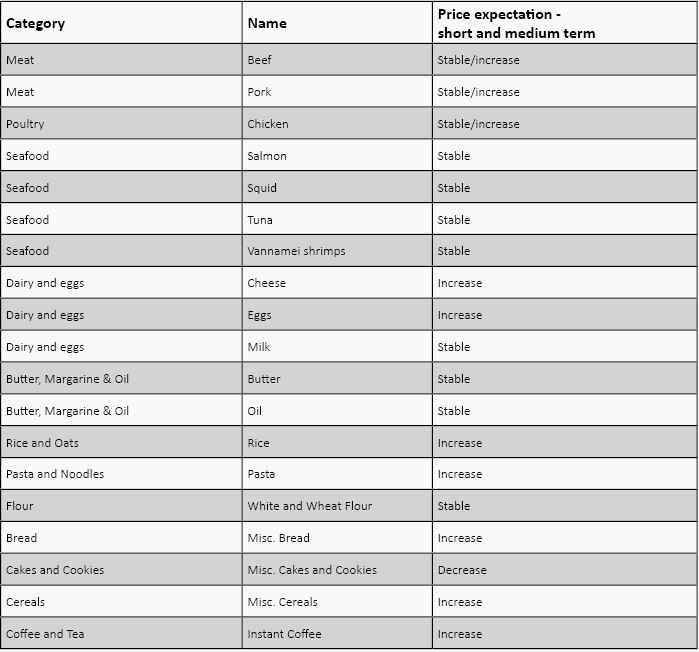 Inflationary impact on stores on short and medium term

On short and medium term, we do not foresee any shortages on technical consumables and stores. However, this situation might change any time due to volatility.

The raw material of several commodities is decreasing, but the increase in oil and gas prices in 2022 is feeding through into higher inflation, effecting raw materials, transport costs, energy costs and production costs. Due to the inflationary effects, we expect the prices of the following stores categories to increase on short term. The list is not exhaustive. 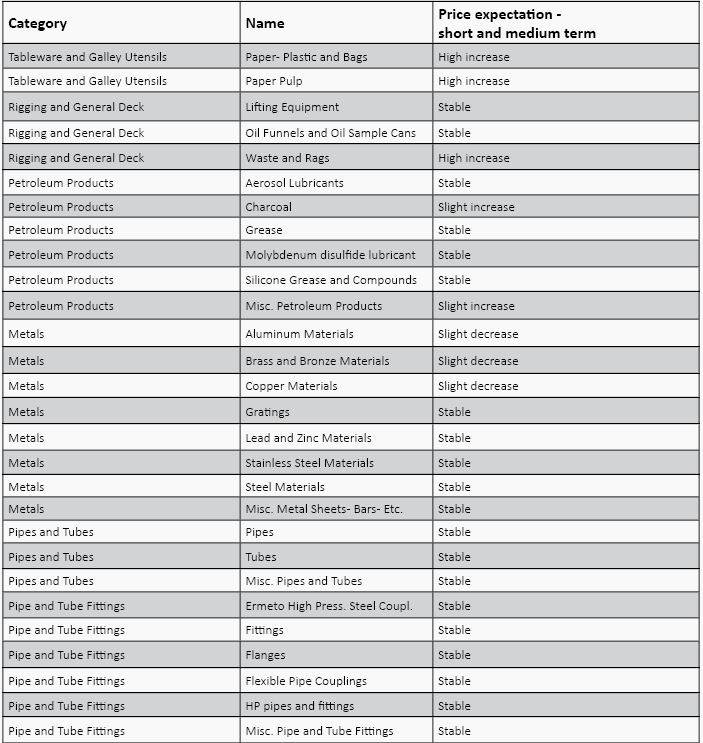 Inflationary and other macro impacts on major ports 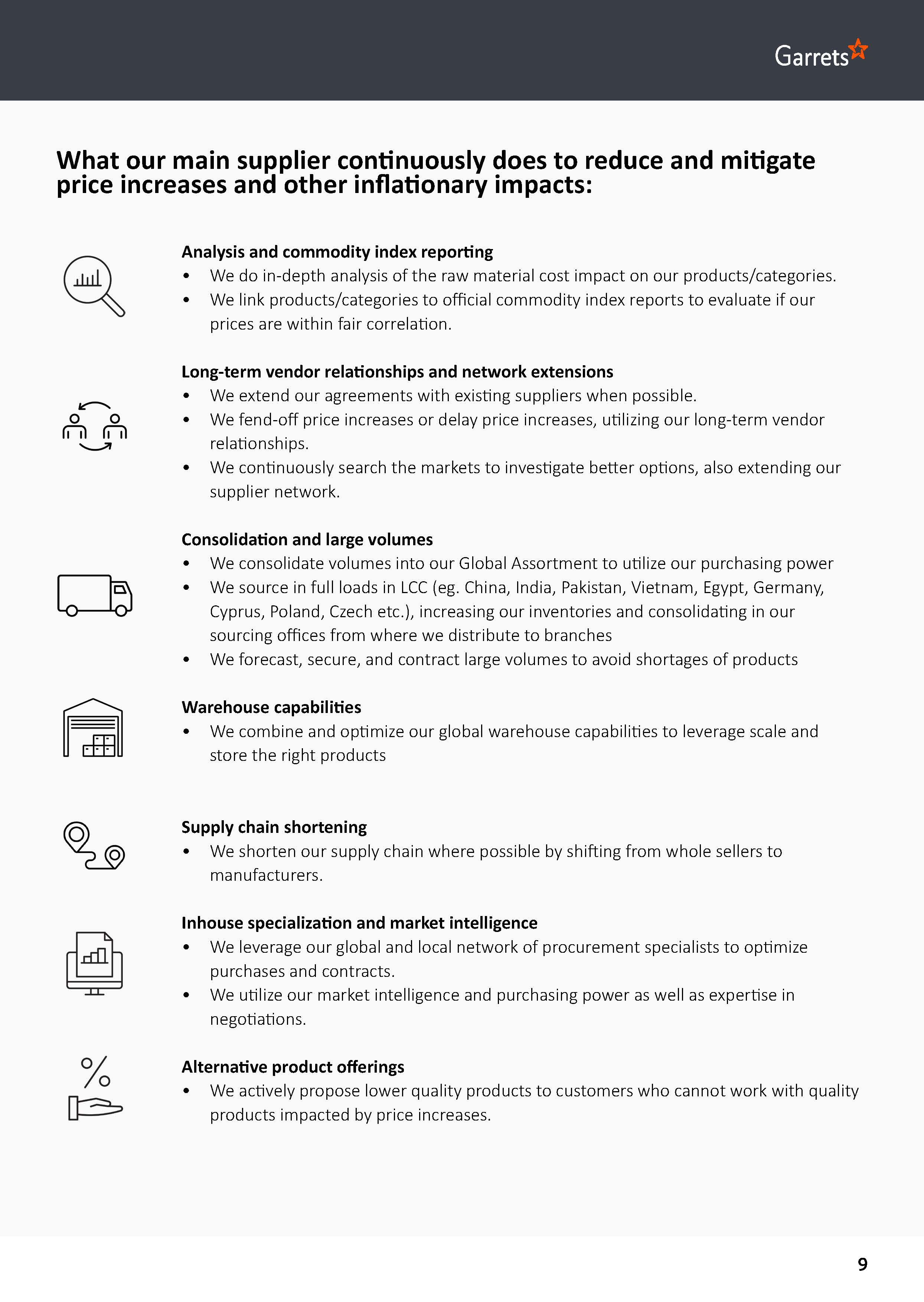